The "Sehpferdchen" ("See horse") has been held since 1998 and has developed into the largest film festival for children in Lower Saxony. It originated in Hanover from the film project with children in the cinema at the Künstlerhaus and from municipal cultural activities in the districts. Based on this it was from the beginning not just cinema but equally a field for projects and activities for a pedagogical employment of film in cultural institutions and schools. First  it expanded with alternating cinemas in the Hanover region and since 2004 cinemas in Lower Saxony and Bremen have also been involved. The "Sehpferdchen" conveys film art and the culture of the cinema integrating further media skills. The creative activities include video filming, 3-dimensional design, theatrical productions, jury work, creative writing workshops and online editorial conferences.

The "Sehpferdchen" shows new and ambitious German and international films for children in up to 60 events. Since 2010 there are also films for young people shown in the "Filme14plus" programme. With their film language appropriate for the age group, they enable an analysis with regard to content and form – especially in pre and post film discussions. They raise one's interest in the cinema and promote a critical approach to the film medium and consequently all other media which make use of the "language of moving picture". The programme is mainly composed of films, that have not yet found distributors in Germany or which have little chance in mainstream cinema. The film choice until now was aimed at an audience aged between 6 and 12. Over the years each festival attained audiences between 3.000 and 5.000 and more than 600 children and young people were involved in projects and activities. 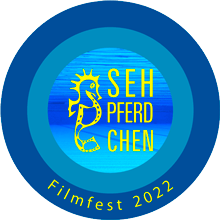